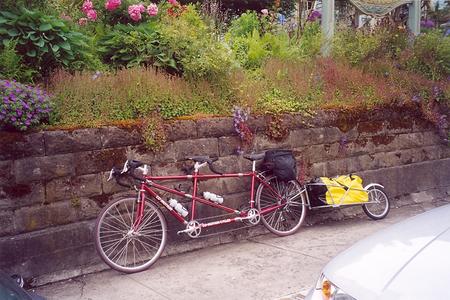 2001 - Oregon Coast: On this trip Rosie showed us just what a versatile and capable machine she is. After riding the Tour de Blast at Mt. St. Helens in Washington, we were driven by a friend to Astoria, Oregon where we began what was at that time our longest tour, more than 450 miles in 6 days down the Oregon Coast to Gold Beach and then over the Coast Range into Grants Pass, Oregon. We hauled our gear in our Bob trailer and stayed in motels and B&B's. 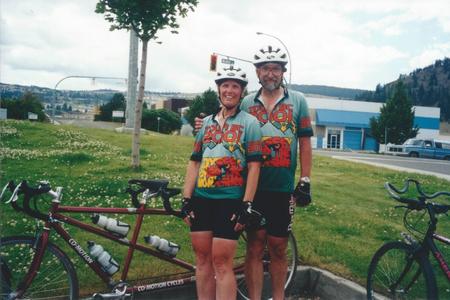 In addition to enjoying the riding on Maui, Lanai, and Molokai, we also spent part of a day doing the mule ride and tour at Kalaupapa National Historic Park. It was a stormy day and the mule ride down the cliff (and back up) was interesting, to say the least. 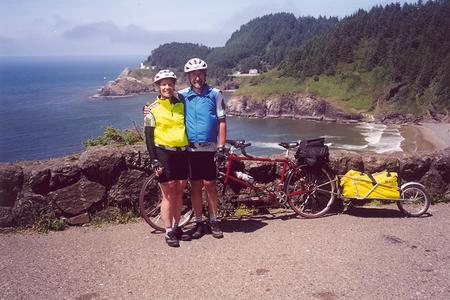 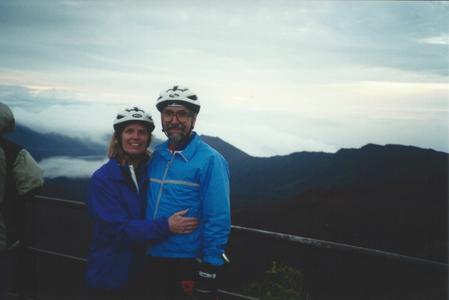 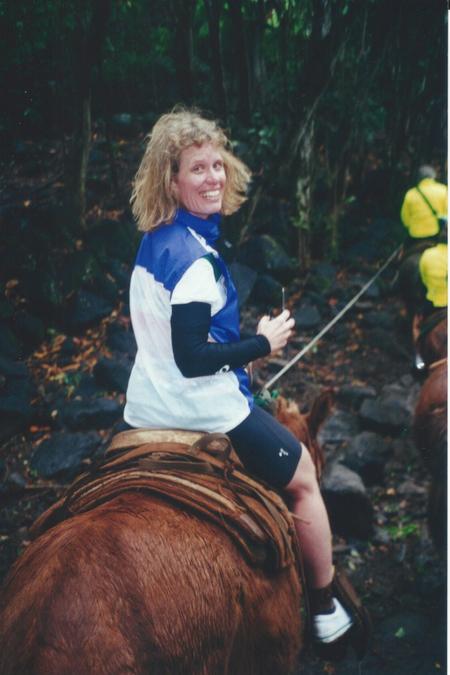 Here we are with the Heceta Head Lighthouse in the background. Lighthouses have always fascinated us and on tour we try to seek out as many as we can.

2001 - Tour BC: This was a big year for Rosie and us on tour. No sooner had we returned from the Oregon Coast than we took off for the interior of British Columbia for a week long tour put on by our friends Danelle and John (now focusing on Colombia as Tour CO). We also rode RAMROD on Rosie that summer, after completing Tour BC. We were in pretty good shape that year! Here we are at the finish of Tour BC, in Kamloops.

It was nice to get a break from Pacific NW winter. By the way, you will see our Bike Friday jerseys in lots of our touring photos over the years. Not only is our Tandem TwosDay from Bike Friday one of our most practical tandems, the jerseys are among our absolute favorites! 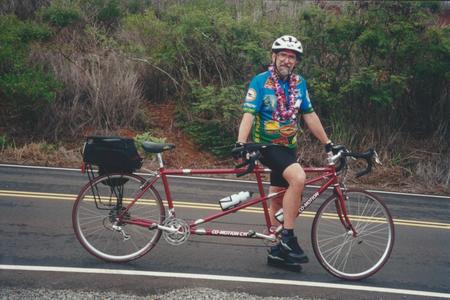 2001 - Hawaii: We started our touring in 2001 by joining Santana Cycles for another trip, this time their 5 day rally in Hawaii over Valentine's Day. This is now one of their signature trips (Santana Adventures). This not only found us back upright, but also on our brand new 2001 Co-Motion Speedster CoPilot (Rosie) for her first trip away from home. Rosie has served as our main travel machine for years and we still ride her regularly, though travel duties have been taken over by more modern tandems. Since we plan to grow old with Rosie, it was fitting that her maiden voyage was a romantic Valentine's Day tour in Hawaii.