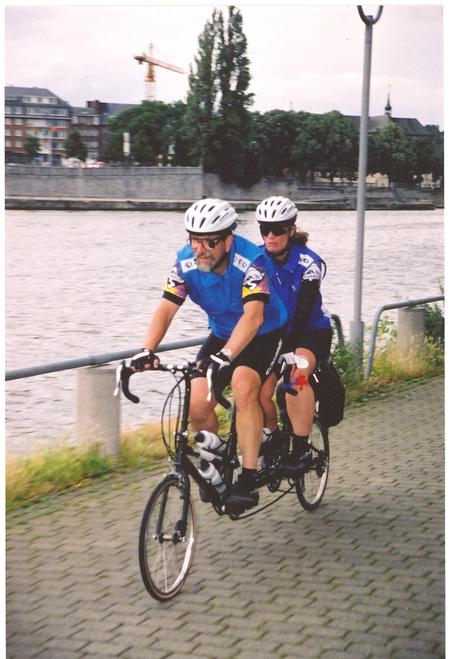 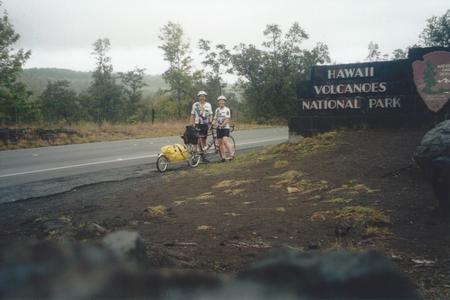 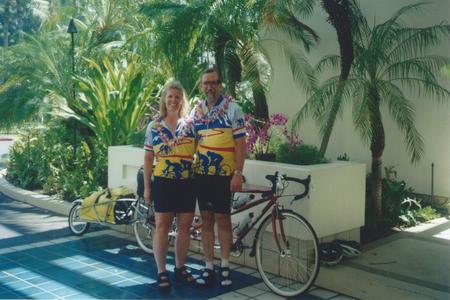 2002 - European AIDS Vaccine Ride: Turns out 2002 was a big year for touring. After Hawaii we were off to Amsterdam for the European AIDS Vaccine Ride, a fund-raising event going from Amsterdam to Paris. Thanks to our very generous donors, we raised over $25,000 to donate to the cause of AIDS vaccine research. We chose our Tandem TwosDay from Bike Friday for this tour because immediately after finishing in Paris, we left for Germany via train, to ride a week long tour along the Romantischestrasse (see below), self-contained, just the two of us, and the tandem from Bike Friday is excellent for this kind of self-contained, point-to-point touring.

2002 - Romantische Strasse, Germany: Once again, the TwosDay proved its worth as a travel tandem. After leaving the AIDS Vaccine Ride in Paris, we took a train to Aalen in Germany, rode north to Wurzburg, trained to Franfurt, and flew home from there. We had the Bike Friday trailer with us to carry our gear. 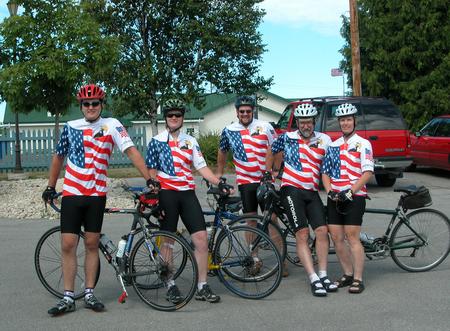 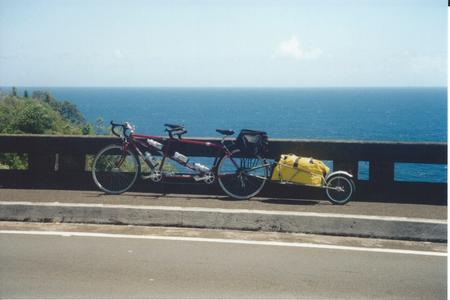 2002 - Door County, Wisconsin: We finished off the touring year with 4 days of touring with our kids in Door County. This was supposed to also be a trip for the TwosDay, but a broken captain's stem bolt during assembly nearly put an end to the tour. Fortunately, we were able to rent a Trek tandem from a local shop, so we were able to enjoy the great touring that the Door County peninsula has to offer. 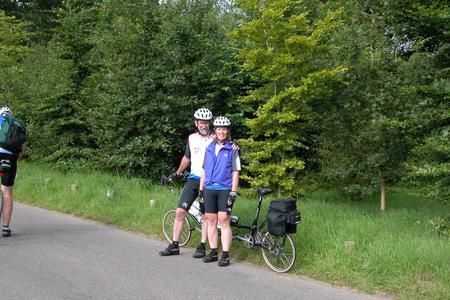 Here we are, hammering into Namur, Belgium at the end of a 125 mile day. The organizers didn't set this up as 125 miles - we managed to do that by getting lost and riding 21 miles in the wrong direction, first thing in the morning!

This trip was marred by some technical difficulties with the tires we were using on the TwosDay. Initially we were riding IRC tires, but they proved inadequate for riding in the conditions we encountered on this tour (rough roads and lots of rain). We weren't able to ride as many miles as we wanted, and ended up having Bike Friday air freight some Primo Comet tires to us in Germany for the following tour, and those tires served us well.

And we rewarded ourselves by spending our penultimate night on the road at the Mauna Lani Bay Resort. We arrived early and checked out late, so we could enjoy a full 24 hours at this wonderful resort. In this photo you can see we got lei'd shortly after arrival.

2002 - Big Island: With our Santana Hawaii experience in 2001 we had gotten a taste of Hawaii and we really liked it. So in the Spring of 2002 we returned on our own to circumnavigate the Big Island of Hawaii. Our bike for this tour was Rosie, our 2001 Co-Motion Speedster CoPilot, and she pulled our gear in a Bob trailer. We added an extra day in Kona at the beginning of the trip, to do some snorkeling.

Here's Rosie, taking a break with her trailer, someplace on the East Coast of the Big Island, north of Hilo. We pulled as little weight as we could and stayed in small hotels and B&B's. Since this was shortly after 9/11, there weren't very many people traveling yet, and traffic on the Big Island was light. Also, given that shoulders on the roads were narrow, the Bob turned out to be a good trailer choice, since it tracks right behind the bike and stays in the same wheel print as the bike. As you can probably tell, we are Bob fans. 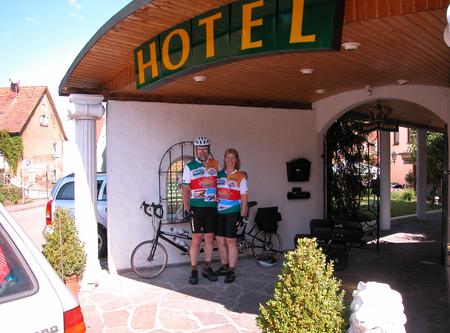