2003 - Washington Coast: The touring year was off to an excellent start with a week-long tour out our back door, across the Olympic Peninsula, down the Washington Coast, along the Columbia River to Portland, Amtrak Cascades back to Bellingham, and then a ride from the station to our house. This photo was at the end of the trip, as we arrived home from the Amtrak station. We had thought we would have to box the bike up for the train trip, but when we arrived at Union Station in Portland the baggage folks said heck no, just wheel her into the baggage car! For this and all our touring in 2003, Rosie (our 2001 Co-Motion Speedster CoPilot) was the chosen bike. She carried our gear in panniers. 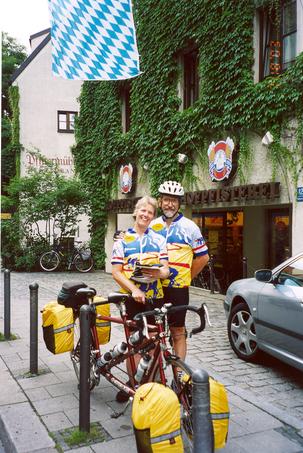 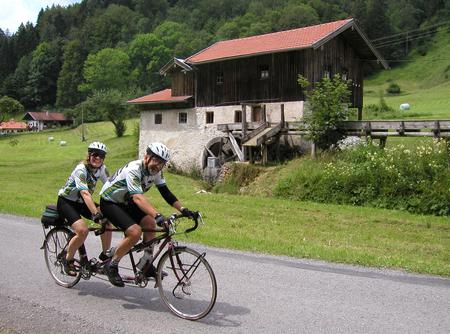 2003 - Bavaria: ​Just two weeks after completing the Washington Coast tour we were off to Munich to join a 12 day Santana tour in Bavaria, highlighting King Ludwig's castles. What a fun tour! Including dinner in a salt mine! The tour ended in Salzburg; from there we took a train back to Munich and then struck out on our own to tour some of the southern part of the Romantische Strasse (see below). Rosie was our bike and for the second tour, in southern Germany, she carried panniers, hence the racks fore and aft in this photo of us riding not far outside Rosenheim, Germany.

2003 - Southern Germany: This tour immediately followed the Santana Bavaria tour described above. We loaded our stuff into panniers, stored our bike cases at the Hotel Platzl in Munich, and spent a week touring, after which we enjoyed a couple more days of seeing sights in and around Munich. It was on this tour that we decided 700x28c tires were not beefy enough to handle touring on Germany's bike trails, which are sometimes gravel. This resulted in a switch to 700x32c tires for future touring, a decision with which we've been pretty happy, except perhaps we could have done well with 700x35c tires in Vietnam (2017). Rosie was, of course, the steed for this trip, seen here outside the Platzl, loaded and ready to take off. 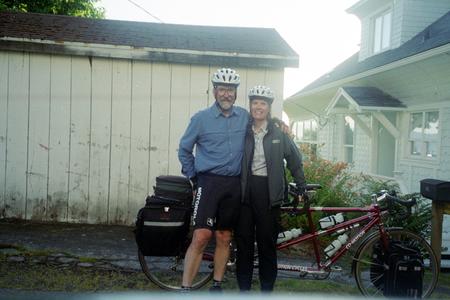